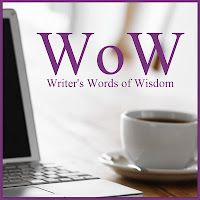 Welcome back this week for the next installment of Writer's Words of Wisdom. I wasn't sure what I wanted to talk about this week, but as with most things in my life, the idea hit me while I was working on another project helping another author with some promotions.

After posting a few updates to my Facebook pages, I came across a post from another author a little upset over a run of "bad" reviews she had received on Amazon. She had the best attitude about it and chose to read them quickly, learn what she could and forget about them. Unfortunately, her friends and fans wouldn't let them go. Instead of just offering her words of encouragement and congratulating her for her attitude about the reviews, some of them commented on a particularly bad one.

Unfortunately, the comments and arguments that played out really didn't help matters. Not only did the reviewer get slammed for not agreeing with all the five star reviews, she was attacked personally for what she found lacking in that particular book. Now, if readers are going to be attacked for giving an honest review of something they read in it's entirety or just a portion, then why should they even try?


Reviews: Are they all that?

For those of you who are just starting out and have your first release coming up within the next few months, let me give you one bit of very important advice. Don't freak out if your book isn't reviewed right off the bat. Review sites are swamped with requests each and every day. It's just not possible for every book to get picked for review. In some cases it can actually be several months or even a year or more before your first book gets a review from a review site.

I'm sure you've noticed that some brand new books will have multiple 5 star reviews simply raving about the author's command of the language, how well they tell a tale, and that the reviewer can't wait for the next book to come out.  Yeah, you can stop snorting with laughter now. We all know that most of those reviews tend to be from our friends and family thrilled we're out there and published. A few of those fantastic reviews may actually be legitimate, but most folks who look at the ratings will take those with a grain of salt. In fact, if they get the book and find they don't like it, they are more apt to go and leave a negative review simply to show the multiple fantastic reviews were misleading.

Reviews can give you a snapshot into what readers like and don't like about your work. They can also help you become a better writer if they give honest and helpful criticism. The reader who takes the time to point out what they enjoyed about the book and what they feel could use some work is an opinion you want to take heed. You may not agree with them, but if you see multiple reviews with the same critiques and recommendations, maybe it's time to change things up a bit.

Opinions will vary. Just because a reader isn't absolutely in love with your hero and heroine doesn't make them idiots or on crack. They didn't like the book. They are entitled to voice their views in the form of a written review, word of mouth, or other social media.

Should You Answer A Bad Review?

No. Neither you nor your fans should answer or comment on a review on the site where it's posted. If you comment and try to argue your point of view with the reviewer, you will only earn yourself a spot in the "another author behaving badly" category. Same goes for fans leaving comments defending you. It's just poor form and should be kept to private conversations. If you wish to share with your friends on your Facebook page how badly the review made you feel, then do so but keep those comments off the site with the review.

Now in the case of malicious reviews that are attacking you personally and have nothing whatsoever to do with the book, those should be reported to the site where they are posted so that they can be removed. It's just not worth it getting into a virtual shouting match over this childish behavior. No matter what you do, there will be people out there who make it their personal mission in life to go around leaving bad reviews and 1 star ratings for as many books as they can. Do yourself a favor and try to ignore these. Don't let them get you down.

Not always. Take a look at a few of the best selling books over the last several years. The Twilight Series and the Fifty Shades of Grey trilogy are really not written very well. The editors I've worked with so far would have absolute FIELD DAYS with all of them. The writing may be terrible, but the subject matter of both sets of books hit home with a large audience. Just because they're not literary works of art, doesn't mean they can't be popular and sell. For Fifty Shades of Grey alone there are over 5000 five star reviews and over 4000 one star reviews on Amazon.

In most cases, even low ratings/negative reviews mean that person bought your book.  A sale is a sale people. Yes, you want your work to be liked by as many people as possible. Your goal is to build up a fan base so these same people will follow you as you publish more books.

How To Use Reviews To Help Build Your Following

Take all CONSTRUCTIVE criticism to heart and learn from it. Be the best writer you can be. Don't keep making the same mistakes over and over again that were complained about with your first book. If you were dinged for poor editing, then by all means invest in a professional editor. Don't rely on family and friends to read through your manuscript unless they are actual editors. ;)

Take any good points in the "bad" reviews and use those in your promotions. Those one line plugs for your book can catch the eye of a new reader.

Take the high road whenever possible. Don't get sucked into arguing with anyone who has given you a negative review. Respect their right to voice their opinion and move on.

And above all, keep writing!