Anger, Betrayal, Lies, and Deceit: If I didn't Live Through It Myself, I Would't Believe It Was Happening...AGAIN! #poetry

I've never made it a secret that my first book of poetry chronicled my journey through some of life's toughest challenges. It was a hard path to take, full of pain, tears and finally joy. I found myself at the end of it and my soul mate. I had to go through all of that in order to finally find the happiness I knew was in my destiny, but there was a time when I didn't think I deserved it.

You may be thinking to yourself that those feelings are quite common for many people and you would be right. Large numbers of individuals get through those dark times with barely a scratch, but then there are folks like me who were to the point they didn't feel they could go on any longer. Yes, it was during that very dark part of my life I was suicidal. I had just filed for legal separation from my now ex, and was betrayed by a someone who had promised me the moon and stars only to shatter my heart and soul into a gazillion pieces by deciding I wasn't what he wanted in his life. 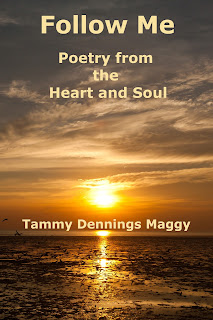 It was during those days I wrote many of the heart-wrenching poems in Follow Me: Poetry from the Heart and Soul. With each and every stanza I was able to mend. It was a painstakingly slow process and one that had many set backs. The biggest one was that I kept letting this man who broke me back into my life. You see, I had been in love with him in high school and I never told him. After 25 years we had reconnected around the time my first marriage was ending. It was the friendship that held me together at the time and he was a great shoulder to cry on.

Unfortunately, instead of keeping it on a friends only level, he decided to amp it up and "confessed" he loved me too.  I fell for hit hook, line and sinker. We made so many plans for our future together, but none of them came to fruition. The promise of a new life with me wasn't enough for him. He wanted to keep things going with the the woman who he claimed was an ex-girlfriend but turned out he had been continuing with her the whole time he was wooing me. I was just a pawn to get her jealous enough to want him back.

Fast forward to three years later and I'm living it again. This time I'm not the one to fall victim to this person, but another friend had to experience the train wreck. The deja vu was so powerful with this one it nearly knocked me on my backside, but I kept silent, hoping that they would work it out and be happy. Unfortunately it wasn't meant to be and they broke things off.

That's when the shit hit the fan.

Instead of just letting things die down, there was a lot of ugliness spewed and I couldn't take it. I decided that I didn't want to be stuck in the middle of all that and cut off the friendship. If I was honest with myself right from the very start, I would have to say this was the only way it could end. Our relationship was definitely one-sided, especially after I married my current hubby. Since I wasn't available all the time, it strained the already lopsided relationship we did have.

Trying to cut all ties has now made this former friend very angry and you guessed it. It's all my fault...at least according to him. For someone who wants me to "but out of his life" he continues to try to draw me out into an argument. I won't do it anymore. I'm done. To help remind myself of all the pain this person caused me, I've reread a few of those poems. The following is one that I think fits the situation perfectly and is once again helping me to move on with my fabulous husband, Liam. He is the one who mended my heart and soul when I thought it was forever broken and raw. Now my cup runneth over...

You’ve broken my heart
After promising me the moon and the stars.
And now you are back with her
Who’s only happy if she’s the center of attention
At all the local bars.

All traces of me and our friendship
Have been removed from your life.
No more laughter.
No more talks of future hopes and dreams.
All destroyed with slashing keystrokes
That cut deeper than any knife.

Enough is enough.
I can’t take it any more.
Getting over losing you has been rough
But it’s time to close the door.

No longer able to tell you that I am still there
Whenever you need, no matter the hour.
I wait and watch and try to mend my heart
And stand by helpless while she hurts you
Again and again…
Because you give her all the power.

Enough is enough.
The wounds in my soul are just too deep.
The meager messages you send off the cuff
Are all I cling to giving me false hopes
And robbing me of sleep.

The fights with her never stop
And  you lose more of yourself
With each passing day.
She takes and takes
And gives nothing back
While you continue to lose your way;
You refuse to see what she has done
And continues to do to keep control of your life
While you just take it and stay there
And let her fill your nights and days
With anger and strife.

Enough is enough.
I can’t watch it play out any longer.
The salt you keep rubbing into my wounds
Make healing tough,
But I can’t let go of the love
That started when we were younger.

When will you live up to the promise
You made to yourself and to me:
“When the fights start up again,
It’s time for me to leave.”
How many more fights and tears
Do you need before you let yourself see?
There are people who are still in your life
Who think you are worth so much more…
Why can’t you let yourself believe?

Enough is enough.
I can’t keep getting pulled back
Into reliving the pain of losing you.
The edges of my heart will stay
Forever jagged and rough
Until I walk away
As painful as it is
And try to start anew.

Posted by Tammy Dennings Maggy at 12:39 AM

Email ThisBlogThis!Share to TwitterShare to FacebookShare to Pinterest
Labels: anger, betrayal, Enough is Enough, Follow Me: Poetry from the heart and soul, letting go, loss of friendship, moving on, poetry, Tammy Dennings Maggy