@KaraLeighMille1 Is Under the Spotlight With Her New #YA #romance

This week for Saturday Spotlight, author Kara Leigh Miller is visiting to tell us about her new YA release, The Georgia Corbins As a special treat, this interview will also be shared with our sister blog Through Stephanie's Eyes. We thought it would be a great way to introduce Stephanie's followers to Kara and her work. So sit back and enjoy a bit of insight into this new book and the author herself. ~Tammy

Blurb for The Georgia Corbins

Ali Philips never thought anything could be more devastating than the day Levi and Tucker Corbin, her two best friends—her only friends—moved away. Three years passed without a single phone call, text message, or email from them and she’s resolved to the fact that she will probably never see them again. Until one morning when she comes face-to-face with Levi Corbin in physics class.

Little does she know, the Corbins have returned to Haldeen with only one thing on their minds: winning Ali’s heart. Ali soon finds herself in the middle of a love triangle she doesn’t want any part of. As she tries to reclaim the friendships she’s lost and to adjust to the unfamiliar feelings she’s having, she struggles with making the one decision that will forever change their lives: Levi or Tucker Corbin?

She’s always had a special bond with Tucker and feels most comfortable when she’s with him. But Levi brings her to life in a way she didn’t think was possible and makes her feel things she didn’t think she would ever feel. Torn between the two, Ali is certain of only one thing–by the time it’s over, she’ll lose one of her best friends.

In one or two sentences, give the core premise behind your story.
Levi and Tucker Corbin have been Ali's best friends her entire life, but when they begin to fight over her, she's face with the impossible decision of choosing between them. 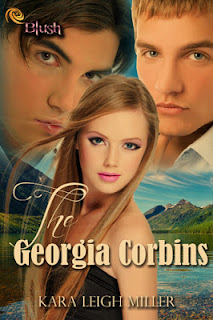 When and where does your book take place?
The Georgia Corbins takes place in the present day. When I wrote it, I had a time frame of Spring 2012 in my mind, but really, it can take place at any time, that's what makes it so great.

It's set in the fictional small town of Haldeen, Georgia. Haldeen is modeled very closely on my own hometown, Mexico, NY. It's a very small town with one main road and two stoplights.

How does the time and setting weave into the plot and persona of the characters?
The time and setting play a large role in the story, even though it may not seem like it. Haldeen is like every small town: everyone knows what everyone else is doing and they're not afraid to talk about it. This leads to some pretty nasty rumors about Ali and the Corbins that she has to deal with. Also, the use of technology, cell phones mostly, play into some not-so-funny pranks. For example, Ali's biggest rival, Shelby Blake, records Ali doing something she shouldn't have been doing, and then Shelby sends it to Ali's boyfriend.

Who is the heroine? What drives her?
The heroine is Alison (Ali) Philips. She's a seventeen year old junior in high school. Deep down she's a tomboy, but slowly she's become more of a girly-girl. All throughout elementary and middle school she was teased by her classmates. It was only once the Corbin boys befriended her that things got a little better. However, when the Corbins move away, Ali is once again alone and forced to fend for herself.

It's the need to show her tormentors that she doesn't need the Corbin's to protect her that drives her. Also, she's really driven by the all-consuming need to keep Levi and Tucker on speaking terms, to keep their friendship intact no matter what the cost to her own heart.

Who is the hero? What drives him?
There are two heroes in the story. Bonus! Levi Corbin and Tucker Corbin—they are seventeen year old, fraternal twin brothers. Levi is a true southern gentleman, always polite and always trying to do the right thing. Tucker, on the other hand, is more of a jokester, always getting into trouble, and trying to take Ali with him. Both Levi and Tucker are driven by the need to protect Ali and to win her heart from the other.

Is there a villain? Who is he/she? What’s he/she like? Why is he/she the way they are? What motivates him/her to cause oppositional force to the characters? Without giving any spoilers, can you give a hint as to what sort of opposition he/she gives to the main characters?
The biggest "villain" in this story is Shelby Blake. She's been a classmate of Ali's since Kindergarten, but it wasn't until middle school that Shelby became a true villain, or rather, a bully. It's hard to stay too much without giving away some spoilers, but I can say this, Shelby has always had a thing for Levi and Levi has never had eyes for anyone but Ali. Shelby doesn't handle rejection well and has made it her mission to make Ali's life hell by spreading rumors, making snide comments at the most inappropriate times, and butting her nose into places she has no business being.

Is this book a part of a series?


Yes, this is actually the first book in a trilogy. Ali eventually makes a choice at the end of this book, but that's not where things end. The Corbin brother she didn't choose isn't going to give up so easily. Book two will lead to a final and resolute choice along with the reveal of a huge, life changing family secret. Book three will follow the brother who wasn't chosen on his path to finding love. Oh, and there is going to be a major accident that will threaten the lives of one of the boys.

Where to find the book

Second and third prizes are an ebook copy of The Georgia Corbins, and one lucky person will win a first chapter critique. International entries are welcome. Good luck! Winners will be announced July 1st.

Make sure you visit Through Stephanie's Eyes to learn more about Kara Leigh Miller and to read an excerpt from The Georgia Corbins.
Posted by Tammy Dennings Maggy at 12:00 AM