Welcome to Not Enough Time in the Day and the sixth stop in Donna Michael’s Book Tour for Captive Hero. She has two great prizes she’s offering up on this blog tour. After you read about her book, stop by the bottom of this tour stop to find out how you can win a free download of any of Donna’s back-list  plus a $15 Amazon Gift Card! 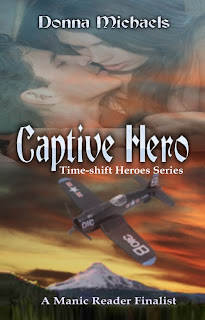 When Marine Corps test pilot, Captain Samantha Sheppard accidentally flies back in time and inadvertently saves the life of a WWII VMF Black Sheep pilot, she changes history and makes a crack decision to abduct him back to the present. With the timeline in jeopardy, she hides the handsome pilot at her secluded cabin in the Colorado wilderness.

But convincing her sexy, stubborn captive that he is now in another century proves harder than she anticipated—and soon it becomes difficult to tell who is captor and who is captive when the more he learns about the future, the more Sam discovers about the past, and the soul-deep connection between them.

As their flames of desire burn into overdrive, her flying Ace makes a historical discovery that threatens her family’s very existence. Sam’s fears are taken to new heights when she realizes the only way to fix the time-line is to sacrifice her captive hero...or is it?

Can love truly survive the test of time?

The door suddenly jerked in and to the right with such force Sam stumbled forward into the cabin.

Son-of-a…
Before she could regain her equilibrium, something big hit the back of her calves and knocked her to the floor—hard.

Intruder? So help me, if he hurt the captain…

Instinct kicked in. Knee thrust upward, she made contact with a solid object and heard a muffled oath before she rolled in the opposite direction. Large hands gripped her waist, and despite her clumsy attempt to hold on to the threshold, he yanked her back.

Yeah, coming here without a weapon had been a real good idea.

Fast and precise, she drove her elbow into the vicinity of her assailant’s jaw and sent a sharp jolt up her arm. She swallowed a cry of pain and rejoiced in his second muffled oath. Two for me. With a quick roll, she scrambled to her knees and began to rise when a heavy weight hit from behind, dropped down and pinned her face-first to the cold, wooden floor.

That familiar, deep voice split the silence, while hot, panting breathes stirred more than the hair on her neck. Uncontrollable shivers covered her skin as recognition stole the fight out of her. This wasn’t an intruder. It was Captain Mitchell. Thank God. He was safe.

The instant she stopped struggling, her body became deliciously aware of every hard, solid inch of the six-foot-two-inch frame completely covering her from head to toe.

The urge to wiggle just so he’d press tantalizingly closer was almost more than she could bear. If only I was on my back… The errant thought sent a wicked quiver straight to her core.

You’re a Marine. You don’t give in.

Sam tamped down her burgeoning desire and willed her voice to convey calm. “Let me up, Captain. I can explain.”

“No, and damn right you can.” He lifted up slightly, easing some of his weight.

Instead of knocking him off balance and regaining the upper hand, she drew in a few breaths and refrained from retaliating. She’d abducted the man. He was out of his element.  She needed to keep things civil.

A swift motion had her arms yanked behind her back, while he wrapped her crossed wrists with something strong and thin. Fishing line? Oh, hell no!

“What in the world do you think you’re doing?”

“Damn it, Captain. You let me go, now.” She thrashed from side to side, trying her best to free her legs from his shifting weight.

“No,” he said, and granting her earlier wish, pressed closer.

Funny, she wasn’t as happy about the pinning as she’d originally imagined.

Unable to move, and barely able to breath, she stilled. Best to see what he wanted, and bide her time until he let his guard down. And he would let it down, of that she had no doubt. Men always did.

Cold from the floorboards cooled her heated skin as she twisted her face to the side. What little breath his weight would allow funneled into her lungs. “You can get off me now.”

“Captain.” She tried to draw in another breath but only coughed. “I c-c-can’t brea…”

He lifted a mere fraction, but the extra space was enough to fill her lungs with a proper amount of air. “Thanks.” She coughed again.

In the next instant, he hauled her up off the floor and pulled her to the center of the sprawling living room. Alarm raced down her spine. He’d moved the furniture to the side. Damn man must’ve had this planned for days. Could she blame him? Of course not. He was a Marine. She would’ve done the same.

Plopped onto a wooden chair, arms hooked around the back, she clenched her teeth against the pain ripping her muscles. Dammit. If he wasn’t a Black Sheep, she’d kick his ass. Turning the tables on him would not be a problem. But she refrained. Barely.

He doesn’t understand, her mind reminded. You plucked him from the middle of war and dropped him in the middle of nowhere. Therefore, you will not give him a permanent limp.

Discipline once again kicking in, she relaxed her shoulders and the stiffness from her arms, and soon the sting of her restraints lessened.

“Now, Captain,” she said as calm as possible. “Kindly tell me what the hell you think you’re doing?”

“Why, I should think that was obvious…Sam.”

The Marine’s unfriendly tone sent shivers of the wrong kind down her spine. Her blood froze. This can’t be good. She lifted her chin, refusing to be intimidated. She also refused to look him in the eye. The last time had completely disoriented; not at all what she needed right now.

With her gaze fixed on his regulation tan shirt, she stared at the uniform, hoping to find the view safer.

Broad shoulders forced the material to hug his lean frame. Damn. He sure had wonderful muscle definition for someone born before the fitness craze. Her mouth dried. And the waxing craze. Ah hell. He had hair, too. A light sprinkling peaked out from his collar, teasing her with thoughts of what else his uniform concealed. She gave herself a mental shake and concentrated on the situation at hand.

“What’s obvious, Captain, is that you’re being a jerk. So you’d better spell it out for me. What are you doing?”

He stepped closer without a reply.

More intimidation tactics. Instinct cried out he wasn’t going to speak until she looked up. Damn, stubborn…

“I’m not interested in playing ‘who’s the baddest Marine’ with you. It’s been one hell of a long week. I’m tired, hungry, and thanks to you, I’m sore, so let’s call our tussle a draw.” Composed, her voice belayed the turmoil swirling in her gut. Fine, he wanted her to look up, she’d look up.

With fingernails biting into her palms, she tipped her head and stared into a pair of unmerciful, cold, blue-green eyes. Beset with an overwhelming urge to swallow—okay, gulp; his unfriendly gaze demanded she gulp—Sam’s cowardly side did an about-face and her chin lifted higher.

“Well? Do you always treat women this way? Does man-handling make you feel big and strapping?”

Way to go, Sam. She pushed him into pouncing tiger mode and was the only flesh around. At least she possessed the good sense to back down. Usually. Too bad she left good with common back on the base.

“Okay.” Keep your mouth shut. Zip it. “Can I take your silence to mean there’s a reason you attacked me and tied me up?”

Muscled arms folded across a broad chest, while a humorless grin crossed his face. “Oh, there’s a reason all right, Sam. A very good one.”

“And your reason is?”

His grin disappeared, along with her breathing.

“To capture the captor.”

Captive Hero is the first book in Donna's Time Shift Hero series is available now from AMAZON. The second book Future Hero will be released this summer.

Ms. Michaels currently has a novella out through The Wild Rose Press. Cowboy-Sexy is part of their Honky Tonk Hearts Series, and is now available in several eBook formats including for the KINDLE.

A bit more about Donna...from Donna herself

Multi-published in eBook and print, I write from short to epic, sweet to hot across several romance genres through The Wild Rose Press, Whimsical Publications, and this book--Captive Hero marks my first foray into self publishing.


I’m married to a military man for over twenty-six years. We have four children, several rescued cats, and live in Northeastern Pennsylvania, where we enjoy all four seasons…although, I’d love to enjoy summer a bit longer and winter a bit less.

NOW ONTO THE PRIZES…
HOW CAN YOU WIN?
READ BELOW AND FIND OUT!

To be eligible for a free download of any of my back-list plus a $15 Amazon Gift Card, simply sign up for my newsletter at the bottom of my Home page www.donnamichaelsauthor.com then email me with the address you used to sign up so I can verify and then add your name to the ‘pot’. At the end of the tour, one name will be randomly drawn and I will email the winner.

Thank you, and good luck!
~Donna

Where to find Donna and her work