This week, I thought I would revisit a post I originally shared October 2011. In it our "boyos" were growing fast and taking over every single minute of our house. From the moment we brought both of them home, they've made sure my husband and I knew they were in charge. LOL 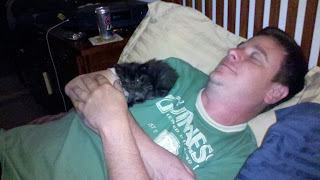 Sirius was the first addition to our home having been abandoned at my veterinary hospital when he was barely two weeks old. Since he was so young, he needed to be bottle fed every couple hours. He was a bit of a demanding little thing even then, but he took over my husband's heart right from the moment I walked in the door with him. The first person he purred for was my hubs. The stinker knew right from that moment he was the King of the house! Even then, he was a biter so I told my husband we were going to get a second kitten so they could beat up on each other and not us. That's what I tell my client's who have kittens who are bottle fed. Usually they turn into little biters and having another kitten to grow up with usually curbs that biting...well, that was before anyone met Sirius Black! 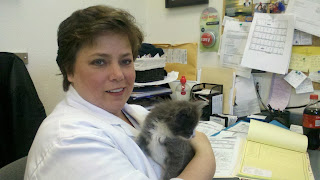 Two weeks after Sirius took over our lives, little Gandalf the Gray was abandoned in a shopping cart near out clinic with four other kittens. He was six weeks old and the largest kitten of the litter. I took to him right from the start and thought he would be the perfect addition to the family and one who could give Sirius a run for his money.  I was definitely right about that part. As soon as Gandalf arrived, Sirius was fascinated by his older brother. Sirius was still in the awkward phase and very wobbly on his feet. Gandalf on the other hand could run and jump up on the bed all on his own. 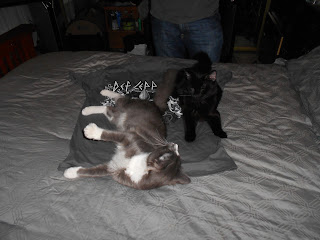 These two fun loving brothers are merely watched over by myself and my Muse.  I can't say we own them. On the contrary, it's more like these two fur balls own us lock, stock and barrel.  And you know, we wouldn't have it any other way.  As you can see by the above picture, anything we bring home, they immediately claim as theirs and won't give it up until they feel like it. Period.

Does that sound familiar?  I'm sure it does. Anyone who's a guardian to a cat or several, knows full well what I'm talking about.  Being a veterinarian doesn't make me exempt from any of it.  In fact, I think the demands of these two rugrats have escalated beyond what non-veterinary folks have to endure.  The fact the I know better doesn't stop them from using their kitten secret powers on me and their "Poppy" at every turn.  When those powers wear off, they resort to the ever popular ankle biting.  Believe me, these two can tag team with the bites and kitten sad eyes and will have you putty in their paws in no time.  That telltale snarky purr will let you know that they got the best of you, but you won't care.  They're just too damn cute to resist. 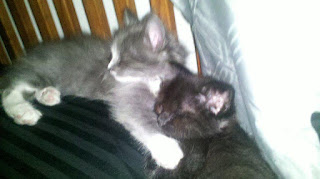 There's no sleeping in for these two. At 3am every single day, rain or shine, they start crawling all over us in bed.  It's really subtle at first. Slowly they move up our bodies to settle on our chest or stomach. Any movement at all, will set off the slow rumbling purrs from both of them. With each passing minute, the purring gets louder and louder until it nearly echos off the walls.  Well, it seems that way since by this time they have made it up to settle on the pillows on top of my head and close to my ear.  Now the nibbling of the cheeks begins.  A few licks of those rough tongues are thrown in for good measure before they bite harder my chin. Notice that I said MY chin.  Those buggers won't bother their "Poppy" like this in the morning.  Oh no!  It's "Mommy" who will get up and feed them if they keep up the pleas.

Pushing them off of the pillows doesn't work.  They just go for phase two.  Gandalf will pounce on my feet, biting through the covers while his little brother Sirius nuzzles back up around my head and bites my ear.  I already have them pierced, but Sirius seems to think I want a few more holes.  Gandalf gets tired of chasing my toes and lands full pounce on my stomach.  Not a good thing this early in the morning as my bladder is near bursting.  I break free of the monsters long enough to make a break for the loo, and then they turn their attention to "Poppy" still snoring in the bed.

Gandalf launches into his "happy feet" dance on "Poppy's" abs.  When he doesn't get the response he's looking for, he goes lower...THAT gets my Muse's attention.  He rolls over, strategically covering up vulnerable body parts and says "It's too early, boyos.  Five more minutes."  And in less time than that, he is fast asleep, snoring once again.  Do these boys give up?  Not a chance!

Both furballs streak to the bathroom to cut me off before I can get to the sink to wash my hands.  Zipping in and out between my bare ankles, nipping as they go, I get herded toward their empty food bowls.  At this point, I wave the white flag.  My skin is already bruised from those teeth and claws. I am too tired to fight back. I shuffle out to the kitchen with both boyos thudding down the hallway.  For animals who are supposed to be stealth hunters, they sure can make a hell of a lot of noise running down the hall!

Once the dishes are filled to their satisfaction, we make it back down the hallway to the bedroom.  The dishes are placed in the appropriate areas on their mats and then...nothing.  Two pairs of glowing eyes stare up at me, unblinking.  "Now what?"  I am too sleepy to figure it out at first, so Sirius walks over to their water fountain bowl and flips his foot in it.  "Forgive me, your highness.  Let me top that off for you."  I grab the water jug from the bathroom and fill up the chamber of water bowl and then climb back into bed, snuggle up to my Muse and try to get a few more hours of sleep. 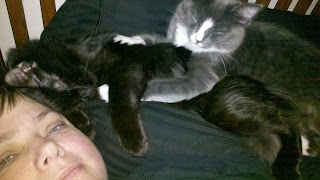 Sirius is not hungry after all.  He climbs up on top of my head again and starts purring Beethoven's Fifth in my ear.  One paw sneaks across my face and settles on my mouth, in essence telling me to "Shush, it's time to sleep."  Hmm, I think it's time to toss one black kitten out of the bed, but he thinks otherwise.  He slides off of my head and settles between me and his Poppy and is out cold in thirty seconds flat.  I'm beginning to feel ganged up on here!

Alarms go off about thirty minutes later and it's time for Poppy's shower.  Now the boys fly into the bathroom and watch him get ready, from shower, to shave, to brushing teeth. Sirius is up close and personal watching every single movement so that he can perform it himself "when he grows up."  I kid you not.  This cat studies everything we do in the bathroom. It's unnerving at times.  Gandalf on the other hand loves to watch from a distance, but will help you get dressed.  Pulling your socks away from you as you reach for them, sitting on your pants, giving them one last fluff before he lets you put them on, you know, the usual.

Both kittens will then bolt down the hallway as Poppy makes his way to the kitchen to get a bottle of water and his keys.  Sirius grabs for the bottle, as Gandalf grabs for the keys.  Tag teaming at it's best once again.  Oh and don't go leaving money lying around either.  They will pocket every single dollar bill they can find.  One afternoon, Gandalf had a twenty dollar bill in his mouth as he came running out of the master bedroom.  With the cash and the keys, I think those two were going to go cruising in the Mustang looking for babes! 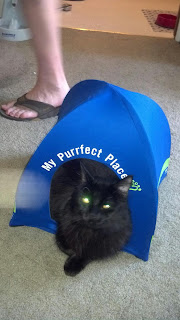 Since the Mustang was off to work with their Poppy, they came back to the bedroom to get me up again.  Seems that it was time to scoop the litter boxes, all four of them.  Yes we have four covered litter boxes for two cats.  The rule of thumb is actually one box per cat, plus one.  We were wise to use four.  These two fill up at LEAST two boxes daily.  They are lean mean pooping machines!  I just wish Sirius would leave the litter IN the boxes and not track it all over the house.  I can dream can't I?

Litter box clean up is a major production in our household. No sooner one of us gets a box scooped out, Gandalf will hop in and dump another load.  This happens with all four boxes.  Where the hell does he keep it all?  Oh and we can't leave the lid off of the litter bucket.  Sirius will try to pee in that when we are dealing with Gandalf.  Once again, they work together to make our lives just a little bit harder. 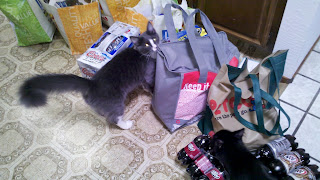 Nothing is sacred in our house. As soon as you sit anything down, they are all over it investigating what the new "thing" is and exactly what they will be able to do with it later. I swear, both of them nearly have seizures from the excitement when we bring in the groceries. Each and every single bag and box must be investigated by both cats thoroughly before we can put anything away.

Even with their antics, and they do new stuff every single day that surprise the hell out of us, we wouldn't have it any other way. They have grown up so fast and have taken over our hearts and our lives.  I know we can't imagine our lives without them now.  When I look into those two pairs of eyes, I know they feel the same.  They chose us just as much as we chose them.