Bio: Natasha always was a daydreamer who told herself stories of love and romance set in other times and places for her own pleasure. Eventually her story worlds became so real, they demanded to be brought out of the world of imagination and onto the page. It gives her great joy to finally share them with you. She hopes you enjoy her story world.
She is married to her own hero and they share they life with a very quirky calico cat. She is a total history nerd who loves to read. She enjoys literature, romance, psychology, and bits of everything else. She has a BA in History and she especially enjoys studying social history and biography and this is where most of her story ideas come from. She likes to know her characters from the bones outward, the air they breathed, the food they ate, the thoughts and social movements and morals that were influencing them in their times. She also enjoys reading psychology and sociology and literature and enjoys listening to music from many different genres.
Natasha joins us here today to give us some insight into the world she has created with the Carte Blanche novellas.  The first is Grey's Lady and is available now.  The second is due out December 26, 2011. 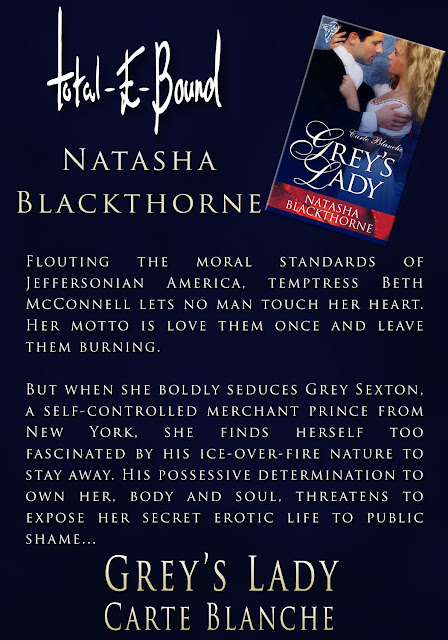 Grey’s Lady is the story of a wealthy New York merchant prince, Grey Sexton, who falls for a poor but beautiful young seductress, Beth McConnell. Yet, for all their social and economical differences, at their most basic level, Beth and Grey are very similar. This is a story that explores how these similarities threaten to tear them apart before love can overcome the fear of being vulnerable.
Both suffered isolation and emotional neglect in childhood. The product of an adulterous affair, Beth grew up in the home of her late mother’s employer. Separated from her half-siblings and kept at an emotional distance, she felt lost and alone. At age eighteen, she was seduced and betrayed by a trusted wealthy gentleman. After this, she left her benefactress’s home, went to live with her half-siblings and help them in their struggling shop. Yet, she still feels out of place.
Grey grew up in an upper-class household, a privileged only son, heir to Sexton Shipping, one of the fledging nation’s largest mercantile fleets. Grey’s father was a stern businessman who did not understand his daydreaming, intellectually curious son. A child in this position might take solace in a closer relationship with his mother. However, Grey’s mother was chronically ill and unable to bear his childish energy. She kept to her chambers and died while he was still quite young. Later at age nineteen, Grey engaged in an emotionally scarring experience with a slightly older woman, something that is not covered in Grey’s Lady. All of these backstory issues and more are explored in more depth in the sequel, White Lace and Promises, which is scheduled for release Dec. 26, 2011.
In contrast, the focus of Grey’s Lady is on the immediate interaction between two wounded and self-protective people who feel an overpowering attraction to each other but who do not want to admit it to themselves or the other. Beth and Grey have unique insight into the experiences of each other and can offer each other understanding and sympathy that others could not. Yet past experience works against them. Both are conditioned to fear emotional exposure and to deny their own need for love. They both use sex to gain temporary, conditional intimacy while keeping their true selves distant from their lovers. Grey uses his wealth and sexual skill to keep his mistresses dependent on him and to gain their adoration and admiration.
Beth exploits her unusual silver blonde beauty to entice gentlemen into brief, purely sexual encounters. It took her a long time to get over the hurt and frustrated desire she suffered when her first lover betrayed her. She enjoys a sense of control being the one who makes the choice to seduce. She always picks handsome, wealthy gentlemen and she delights in turning the tables by leaving her lovers burning for her. It’s a way for her to maintain the illusion of power in relationships with gentlemen who are far above her in wealth and social position.
Both Beth and Grey employ rationalization to prevent these conditional relationships from growing into something deeper. Grey puts his business life up as an impregnable wall between himself and those around him. He's overly responsible. He tells himself he cannot give extensively of his time and energy because of the responsibility and demands of his position.  As the owner of Sexton Shipping, too many people depend on him to make the right decisions at the right times. If he allowed himself to be too distracted by fluttering lashes and the crinkle of muslin, the whole world would come undone.
Beth cites the very real fear that her secret erotic life may be discovered. Her older brother is very protective. Because of their mother's fall into adultery, he is very sensitive about the virtue of the women in his household. He might decide to engage in an affair of honor. Additionally, her young and impressionable nieces might try to emulate her example. Her childhood benefactress might suffer disappointment and shame and feel to blame for Beth’s bad behavior as an adult. For this reason, Beth tells herself, if she limits her clandestine sexual encounters to once then her risks for discovery are greatly decreased.
For Grey and Beth, these excuses are just that, excuses. Neither of them wants a real relationship with the opposite sex. This internal struggle, between the desire for the other and the fear of exposing themselves to possible hurt, results in a powerful external struggle. Grey’s increasing sense of possessiveness for this elusive and enigmatic young woman bewilders him. He holds firm to his old patterns, determined to gain her long-term commitment as his mistress. He tries to gain control over Beth with his wealth and sexual skill. Beth is equally determined to seduce and conquer Grey. Unable to forget him after their initial encounter, her answer is to indulge her desires for Grey until she’s sated. Then she plans to leave while he still wants her.
She resolves to be the winner yet so does he. However, neither can gain supremacy over the other. Can these two wounded, self-protected people find the inner courage needed to lower their defenses long enough to let the other know they feel something more than lust? Or will their fears and need to control tear them apart?
Find Natasha: Author Site | Blog | Twitter | Goodreads | Amazon | Shelfari | Facebook |
Read the first chapter of Grey's Lady
HERE
Join Natasha over at Behind Closed Doors where she gets temptress Beth McConnell to open up and tell a bit of her story in her own words.

Posted by Tammy Dennings Maggy at 12:04 AM