Come on in! Gather around the fireplace with your beverage of choice and join me in welcoming our guest author Natalie Acres. 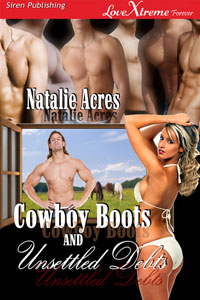 A Siren-Bookstrand LoveXtreme title, Cowboy Boots and Unsettled Debts introduces readers to Abby Rose and her team of seven fellow operatives. With a deadly mission in front of them, Abby’s team members are forced to face regrets as they come to terms with the fact they’ve fallen in love with one of their own. Now, with Abby taking an inside position on a very dangerous mission, Abby’s men work around the clock to make sure she leaves this assignment alive!


A woman’s life is hectic. Between family and career, it’s often difficult to juggle day-to-day activities much less squeeze in something extra. As a writer, I often find myself in a crunch for time. My muse pulls one way and readers guide me in another direction altogether. Lately, I’ve discovered my muse shouldn’t have a dog in the race. When readers ask for a certain book, the excitement and energy they have for a particular series is a great source of inspiration when I finally sit down to write a new book.

Cowboy Boots and Unsettled Debts is a prime example.

I’m thrilled and excited about the new Cowboy Boots release, but must admit Cowboy Boots and Unfinished Business remains my favorite book in the series due to the unusual bond formed between sisters as one woman courageously faces her death while asking another woman to take care of the men she’ll soon leave behind.

The reader support for the Cowboy Boots series is one I can’t describe. Readers write and ask about continuing the series and I can promise there’s more in store. While writing Cowboy Boots and Unsettled Debts, book three, the idea for the fourth installment materialized as well. Cowboy Boots and Undesirable Characters will soon be submitted for consideration.

In the meantime, more books are in the pipeline for the Cowboy Sex series. Sex Party was my first western ménage romance. If you enjoy family sagas, come on over to the ranch and meet the Cartwell family. While you’re there, stop by and say hello to the McKay brothers, too.

The Cowboy Sex books tend to write themselves. The stories unfold quicker than I can put them down on paper. The Cowboy Boots books were a little more difficult to write. Driven by the hot romance and fast action, the characters in the Cowboy Boots books tend to ‘get carried away’ with their toys and props.
With several series to complete and numerous manuscripts stored on my desktop, there’s the ever-present daily question—Where to begin?

Thank you so much for stopping in today.  For more on Cowboys Boots and Unsettled Debt, head on over to Behind Closed Doors for a hot excerpt or two! ;)


Natalie Acres is the author of several best selling titles including Cowboy Boots and Untamed Hearts, Sex Party, Sex Games and Wanted by Outlaws. She writes western ménage romances, and in her spare time reads anything she can find on the historical towns of the Old West. She lives in the south with her family. For more information, visit her at www.myspace.com/natalieacres.